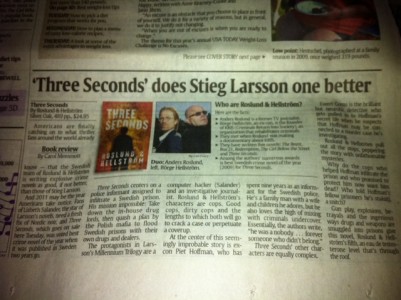 Återgivning av recensionen i USA Today:
Americans are finally catching on to what thriller fans around the world already know — that the Swedish team of Roslund & Hellstrom is writing explosive crime novels as good, if not better, than those of Stieg Larsson.

And 2011 may be the year Americans take notice. Fans of Lisbeth Salander, the star of Larsson’s novels, need a fresh fix of Nordic noir, and Three Seconds, which goes on sale here Tuesday, was voted best crime novel of the year when it was published in Sweden two years go.

Three Seconds centers on a police informant assigned to infiltrate a Swedish prison. His mission impossible: Take down the in-house drug lords, then quash a plan by the Polish mafia to flood Swedish prisons with their own drugs and dealers.

The protagonists in Larsson’s Millennium Trilogy are a computer hacker (Salander) and an investigative journalist. Roslund & Hellstrom’s characters are cops. Good cops, dirty cops and the lengths to which both will go to crack a case or perpetuate a coverup.

At the center of this seemingly improbable story is ex-con Piet Hoffman, who has spent nine years as an informant for the Swedish police. He’s a family man with a wife and children he adores, but he also loves the high of mixing with criminals undercover. Essentially, the authors write, ”he was a nobody … forever someone who didn’t belong.”

Ewert Grens is the brilliant but neurotic detective who gets pulled in to Hoffman’s secret life when he suspects that Hoffman may be connected to a murder case he’s investigating.

Roslund & Hellstrom pull out all the stops, peppering the story with unfathomable mysteries.

Why do the cops who helped Hoffman infiltrate the prison and who promised to protect him now want him dead? Who told Hoffman’s fellow prisoners he’s stukatj, a snitch?

Gun play, explosions, betrayals and the ingenious ways drugs and weapons are smuggled into prisons give this novel, Roslund & Hellström’s fifth, an eau de testosterone level that’s through the roof.